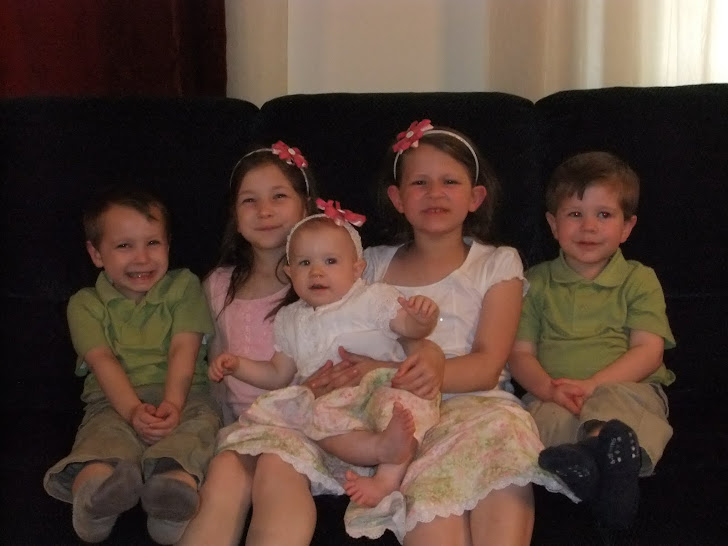 Death of a vision

Our precious Katie is 12 days old. It has been a busy and quick 12 days. I am so grateful for the ways the Lord has encouraged my heart through His Word, the book "Jesus + Nothing =Everything" by Tullian Tchividjian, nurses, doctors, family and friends. Despite the many challenges we have faced, God's goodness is so evident in each situation. God has orchestrated these last few weeks in ways that I cannot ignore His hand on our lives. He has been so very good to us; we are so unworthy! I have learned so much about God's character and I am humbled that He would pour out so much grace on my life as well as our precious Katie. He is good. These last few weeks have had a few circumstances that have challenged me to change my views on some things and turn my heart to trust God's goodness in new ways. One has been the death of my fertility. This has been a difficult "coming to terms", and yet, I see God's hand even in this.
When I was first married to Andy, we were neither a fan of birth control and really planned not to use anything to prevent having children. We both wanted to wait a little while, but the Lord blessed us 4 months into our marriage with the expectancy of our first child. Every year after that, before our baby was a year, we were expecting again. Andy would joke about the fact that he should invest in pregnancy tests because I took so many! However, each pregnancy had its own set of difficulties. We experienced 4 miscarriages, our second daughter was born at 30 weeks, Doctor visits were a challenge because there were so many of them, we had genetic testing done after our 3rd miscarriage and the loss of our first son, Nathan Joel. This season of childbearing really has been a challenging season, and yet there have been so much joy despite the struggles. After each challenge, I thought, "I'd do it again!"
When we found out we were pregnant with Katie, I was nervous. Sophie was only 10 months and I was nervous about being pregnant as I had many complications at the end of my pregnancy with Sophie. The excitement was tainted a bit by the nervousness of what Katie's pregnancy would bring. Things seemed simple for the majority of her pregnancy...I even hoped pre-eclampsia would not plague me. However, November hit, and complications abounded. Even then, I hoped we would carry her close to term, but the Lord had other plans.
While waiting for my c-section, Andy and I had a decision to make. If I delivered at the hospital I had planned, permanent closing of my childbearing would not be offered. At this new hospital, it was an option. As we prayed and sought to make a wise choice, I went back and forth. I knew conceiving again would be difficult and hard on my body. I didn't like the direction Katie's pregnancy had headed and I want to be there for my children as well as not put any future children's lives at risk. My husband encouraged me to go ahead and get my tubes tied. He truly felt Katie was it for my body and as we both desire to adopt, adding to our family would still not be an issue. We did make the decision to tie my tubes, and when we delivered Katie, they told us my uterus at my previous incision site was paper thin- they could see right through it. For me, that was a greater confirmation that we needed to be done. However, despite so much pointing to that direction, it still doesn't take away completely the sense of loss I feel.
When we were pregnant with Katie, I received a few colorful comments that really bothered me. One person asked if I would finally be content after this baby and finally not have any more. I was so irritated. I have never understood why people think making comments like that are acceptable. I mean, is my having kids bugging you? They don't need to deal with my kids if they don't want to. I am more than happy to mother my children. I have received myriads of comments now when people ask if we are done and I say sadly yes. They tell me I will be so happy to not be pregnant again or that I have six so now I can be done and let others have some (as if my pregnancies prevented anyone else from having children!). I know the heart of where these comments come from and while they are not meaning to hurt me, they bear the sting all the same. I love having kids. I don't always enjoy every aspect of pregnancy, but I enjoy feeling the baby move, holding a new one, smelling the new baby smell, and the joy on my other kids faces when they see and love on the new little one. With Katie, I feel the sorrow of "this is it...she is it", and at moments it makes me so sad. However, I am so grateful the Lord blessed us with 6 children and protected them and me during some serious complications. God has been good, and while I do believe the decision was the right one, it will not take away the emotional struggle I face. I can rest assured in the One who has ordained each situation and is the giver of wisdom. I know His hand is in this as much as each situation I have faced. I am grateful to know Who I can go to when the struggle gets hard knowing He is Sovereign and He has my good and His glory at the center of it all~ even in the death of a vision!
Posted by Watered Spring at 10:48 PM

Devotional for the Year

Blogs I love to read